-So it’s a half game, but the Yankees are in first. It’s not much, but it’s a start, and at this point in the season, I’ll take it.

-I was looking through my computer for some appropriate image to include here to celebrate the Yankees’ return to first. Couldn’t find anything that fit, but I did find this, from the great brawl of ’98: 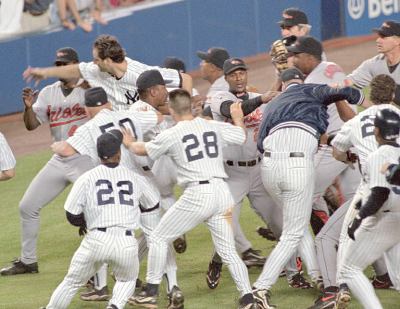 Looking closer at the image, I have to ask, what in the world is Graeme Lloyd doing here: 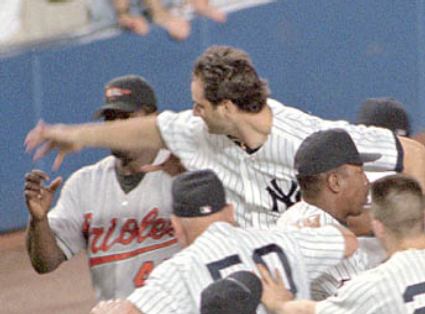 Looks like he’s trying to use the Von Erich claw on Arthur Rhodes. Don’t remember what Von Erich it was that used the claw-but didn’t they all? Fritz? Kerry? Curly Joe Von Erich?

-That Rivers Cuomo is one interesting fella. But if he’s happy and at peace, who am I to judge?

-For the first time, I watched an episode of Lost live. The pacing was real different than the DVD and I can kind of understand why they’re drawing everything out. I’m avoiding spoilers, so it was nice to feel what Jack was feeling when he was seeing whatever the hell he was seeing. I did notice though a number of clues and other things to made me go hmmmmm throughout the episode. Gonna be an interesting season.