Steinbrenner didn’t keep his word of sticking “with building ships.” Steinbrenner purchased a team that had been neglected by its owners and (with help in the front office and the field) turned the franchise around to make the Yankees a team to be resepected in the late 70s. 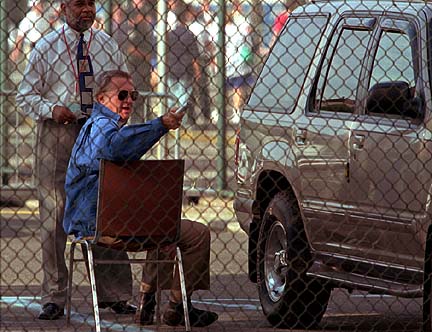 While his actions and personnel moves in the 80s ranged between questionable and downright wrong, he paid the price on two fronts–the Yankees had their worst seasons ever (and I was at the stadium for many of those games) and he received a life suspension**.

The suspension of the early 90s allowed cooler heads to change the pace and priorities for the Yankees. This culminated in the dynasty of the late 90s, and led the path for the success of the Yankees to this day. Yes, they haven’t won a Worlds Series in six years, but they’ve never not been in contention. While some of Steinbrenner’s moves and actions may have been done for the “glorification of his massive ego,” unlike some other owners, he has always put everything into giving Yankee fans the team they deserve.

Over the past year, Steinbrenner has moved into more of a supporting role, letting General Manager Brian Cashman call the shots. Cashman has already erased some of the more questionable moves made recently and equipped the Yankees for the future.

Were Steinbrenner still running the Yankees like he did 20 years ago, I would not be writing this kindly about his ownership. And we don’t know how much longer his ownership will continue. But there’s nobody*** I’d rather see as owner of the Yankees.

*I have a signed letter from him, sending me his “Best Regards”
** Lifetime=Three years, give or take a few months
***Other than myself