(This isn’t about the singer Seal, but rather a quest much like that taken during Kramer’s favorite Star Trek movie).

One of the elements of my job is incorporating the State Seal of Ohio into various documents and publications.  I’m familiar with its history and different forms.  Just for you, to help move this story along, here’s what the seal looks like:

Legend has it that the seal is the depiction of the sun rising over Mount Logan (in Southeastern Ohio) from outside the home of Thomas Worthington, one of the fathers of Ohio Statehood.  The river, bushel of wheat and sheaf of arrows all have their own meaning as well.

The Civee and I both took the day off today.  We wanted to go hiking in a state park, but ended up exploring the City of Chillicothe and Adena, the nearby state historic site which is also the aforementioned home of Governor Worthington.  I was looking forward to seeing the actual view that inspired the state seal.  One of the guides at the museum told us it wasn’t quite exact.  He was right:

Granted, I didn’t expect to get there early enough to see the sun rising between the mountains.  And I didn’t think there would be arrows or wheat laying around.  But there’s no river.  And while it is an incredible view, it just doesn’t feel like the seal. 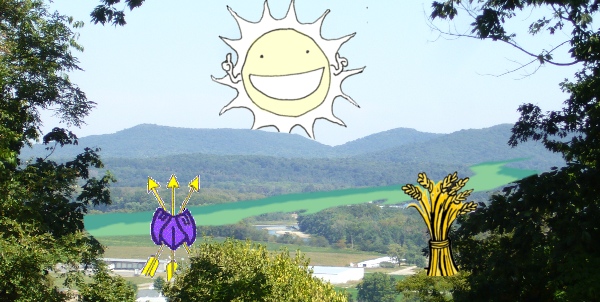 2 thoughts on “The Search for Seal”